I love talking  about bits.  Last year I did an unmounted lesson for our pony club and the leaders had to shut me down after I had been going on for an hour and a half about bits.  While I don’t intend to be a hoarder, I think everyone should be allowed to have a collection of one thing.  My one thing is bits.

I started both geldings off in my go-to bit for green horses. 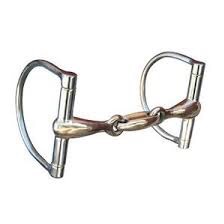 I choose this bit for green horses because it works on their lips and tongue.  It may also work on the bars of their mouth, depending on the position of the rider’s hands.  Because it had three pieces, it does not have a center joint that pokes the horse in the roof of the mouth.  The dee ring shape encourages green horses to learn to take a cue  for turning by pushing on the opposite side of their face from the activated rein (e.g. when pulling on there left rein, the right side of the bit will be pushed against the right side horses jaw).

Did you follow all that?  No?  Here are some diagrams that may help you out. 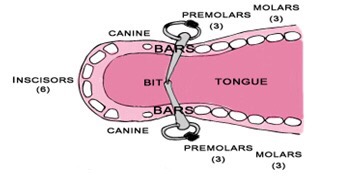 Anatomy of the horse’s lower jaw

Parts of the snaffle  bit

Did that clear some things up for you?

Well, niether brother liked my choice of bit for them, so it was time to go to my bit box.

Blue accepted the bit easily.  He seemed to fuss quite a bit with the mouth piece though, so I decided to put him in a slightly more rigid single joined snaffle. His new bit had a thinner mouthpiece and was a few sizes smaller than the original bit.  In subsequent work outs he seemed very happy with the way his new bit fit and carried the bit quietly with a relaxed mouth.

Yesterday’s blog entry talked about Corny’s tongue acrobatics when wearing a bit.  He would twist his tongue, flip it over, draw it up, or loll it out his mouth when wearing a bit.  After one of his early workouts I noticed that his tongue was purple on the bottom.  I don’t typically study the underside of horse’s tongues, are all horse tongues purple on the bottom?  I checked out the other horses that were currently on my tie racks. Neither Dom, Poni, nor Blue had purple  bottomed tongues.  While my sample size was very small, I felt confident that the purple  tongue was not normal.

My theories for why Corny’s tongue is purple were:

I decided to change Corny’s bit to one that offered plenty of tongue relief, without encouraging fidgeting.  I choose a Mullen mouthpiece (no joint) with a port (an upwards swoop in the center).  To address the metal sensitivity post of my theory, I selected a plastic covered mouthpiece.

It worked!  While the tongue issues have not gone away, they have drastically reduced.  Corny showed improvement the next workout with the new bit.  After he got dental work, he improved even more.

You may have noticed that there are no nosebands on the brothers’ bridles.  I could probably cover up some of Corny’s mouth issues if I slapped a noseband on him.  However, it would only be a cover-up and not resolve any of the issues that cause the mouth issues.  I’d rather address the issues and solve them in the early stages of training , rather than fight against them for the rest of his riding career.  Niether horse actually needs a noseband until they begin jumping or competing.

Since they don’t have nosebands, there is a danger of pulling the bit all the way through the horse’s mouth.  To mitigate that risk, I’ve attached a chin strap connecting the rings of the bit.  I simply use a spur strap, but purpose built chin straps do exist.

I’ve been working the horses with their halters under the bridle so I can hook my lines to the halter, or to the bit.  That way the horses can learn to move with the bit in, without also being responsible for responding to it.