No one has made a greater influence on my horsemanship in the last ten years than Ellen Eckstein.  While most riders go to Ellen for her expertise in dressage lessons, I get giddy at the anticipation of a ground work lesson with her.

If you don’t know who Ellen is, read her biography here.

I brought Blue to my lesson with Ellen because he has been more committed to bracing against me than Corny.  Happilly, the previous day’s session with Blue had given us a break through.  I could now turn Blue’s neck without his body turning.  I could also now have an influence over the direction his ribs roll.  I was excited to build on this in our lesson with Ellen.

First we worked on yielding Blue’s haunches while he was at the end of the line.  I had been striving to do this over the last month and made some progress.  In my session with Ellen, she made some minor changes, that made a huge impact on blue.  She told me to step backwards and towards Blue’s haunches when asking him to yield.  It went so much better!  We even got him to step away from his body laterally with his outside hind a few times!

Of course, none of this would have been possible without all our hard work on longing on a circle.  This was the first day that I’ve worked Blue that he didn’t make an unsolicited direction change, and didn’t pull hard on me every time I asked him to turn his head.

After we longed and yielded haunches for a while, we put on Blue’s bridle.  She  took Blue and did some rein yields.  A rein yield is where you ask your horse to move his head to the side and he responds by moving his hind feet laterally away.  I didn’t recognize it at first because it looked different when a shorter person does it (Ellen) than a towering monster does it (me).

The rein yield from the ground is something I have been doing with all my horses.  In this session Ellen made me aware of the precise feel on the bridle that I needed to have from Blue before I give my release.  Blue’s habit when asked to yield to anything is to brace  against it.  This exercise was no exception.  Blue tended to brace his outside hind, and just before picking it up and unbracing it he would lift his nose and pull on the bit.  It was reminiscant of a racehorse leaning down into the bit to move his legs faster, a habit that had previously brought Blue much success.  By the end of the session we got him to softly turn his head and move his hind feet without this additional tug. 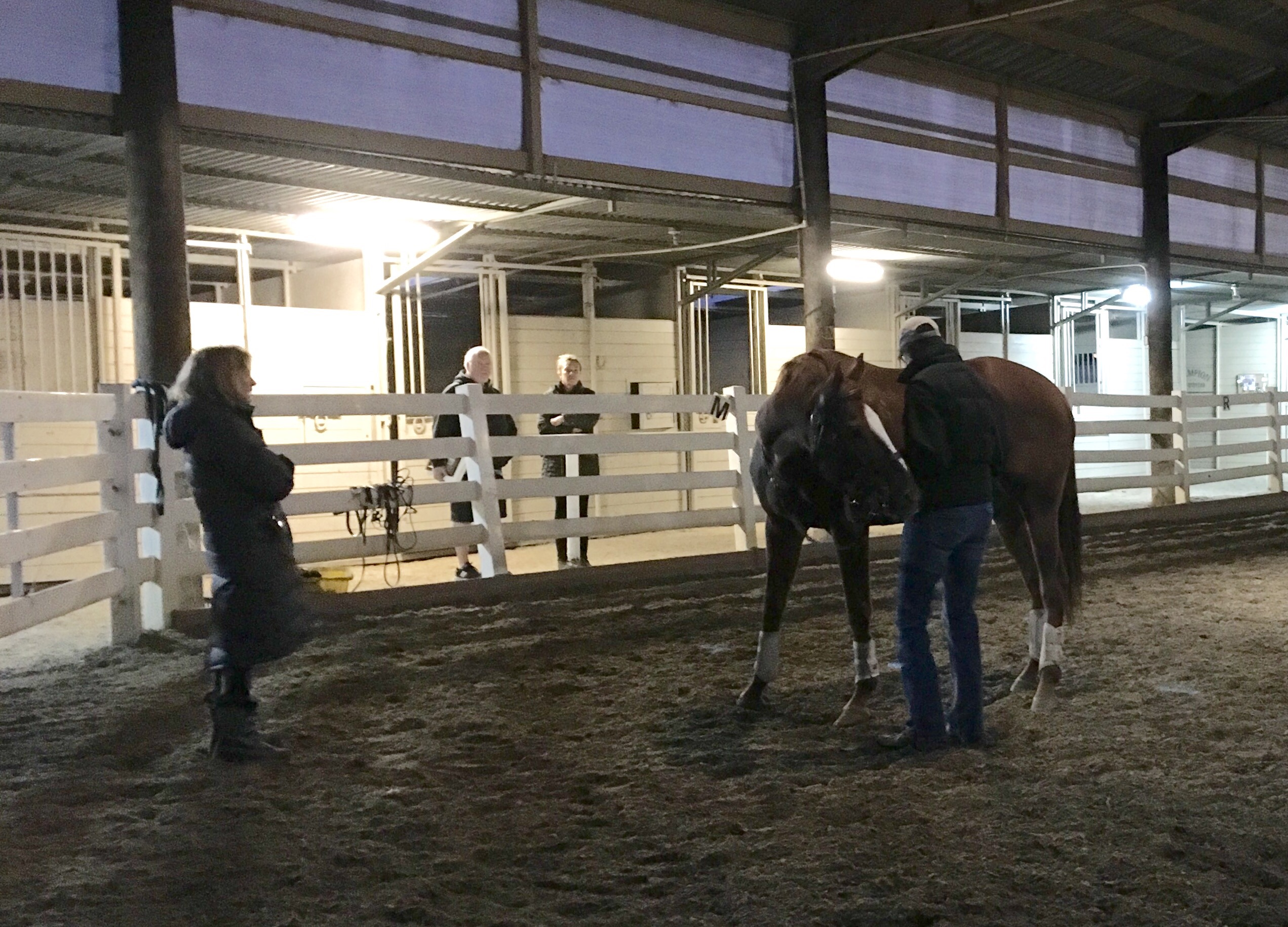 Ellen coaching me through a rein yield while Blue’s owners look on.