Blue and Corny are the brothers I’m hoping to take to the Thoroughbred  Makeover in Kentucky. Their owners, Mark and Ann, invited me to go to the races with them!

I was excited to go!  I haven’t been a big fan of racing in the past, but I’m always very curious to see how other horsemen do things.  Over the summer I took a saddle seat lesson out of curiosity too.  I felt like an anthropologist, studying a different culture.  I figured learning about Blue and Corny’s former culture as racehorses would help me to transition them to their new culture as sport/pleasure horses.

The first thing I had to do was dress myself.  We were having lunch in the Turf  Club and there is a dress code there.  Since I had my kid, I haven’t had many occasions to go out and had very limited selections.  I ended up looking like a horse show judge… Equestrian fashion that is a bit dated, and a scarf.

Mark and Ann picked me up and off to the races we went!  We went to Golden Gate Fields.  The first place we went was to the backside stables.  We visited the Victory Rose barn where Mark and Ann’s horses live while at the track. 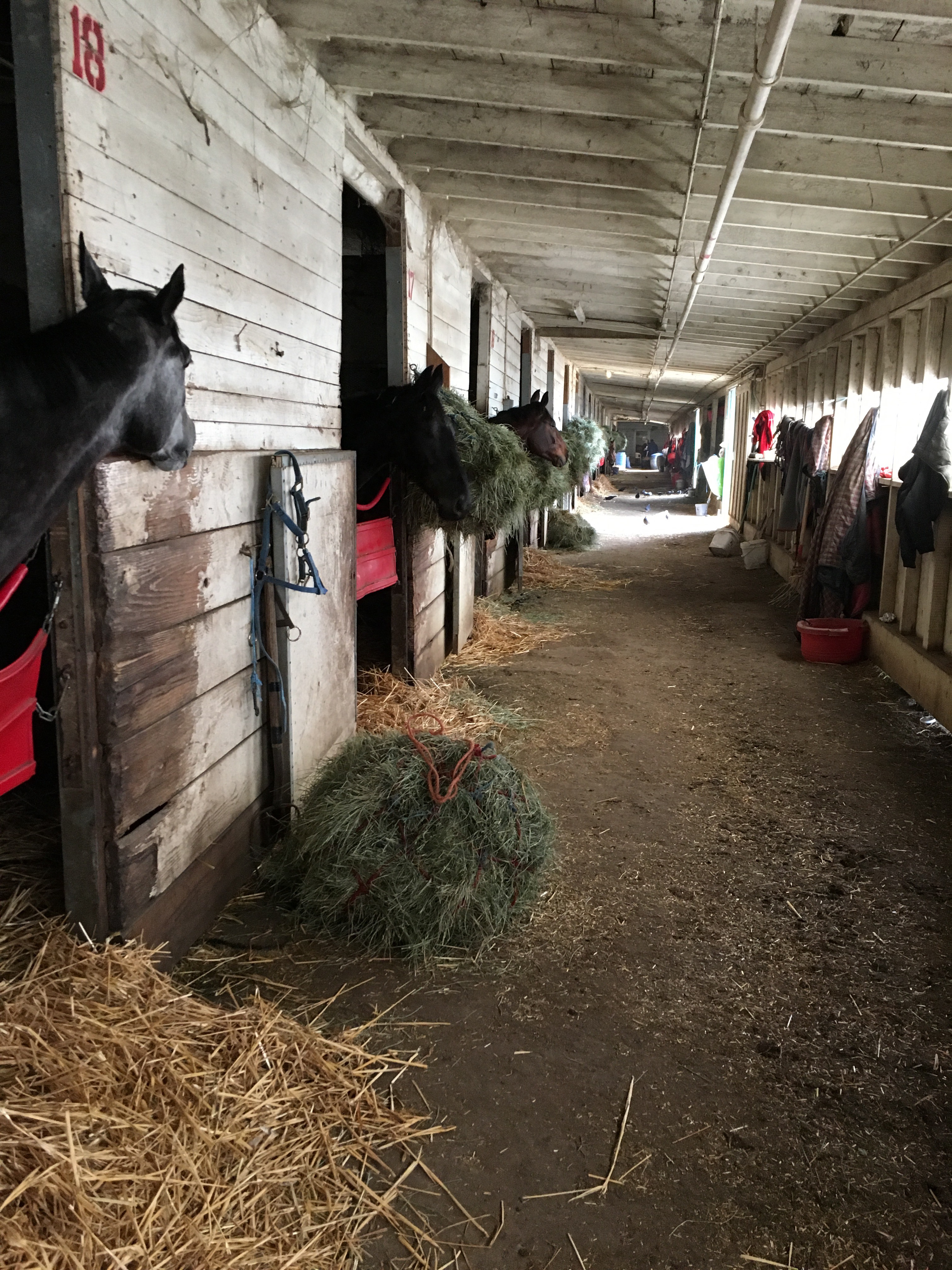 The box stalls were pretty big, and some of them had cut outs between them so the horses could touch each other.  They were all deeply bedded in straw.  Every horse had a stall guard and his door open.  Just outside the stall was a endless supply of Timothy hay hanging in a net. Many of the horses were also feed alfalfa or oat hay inside their stalls, as well as a grain formulated for racehorses.

Each stable had their own hot walker, and there were an abundance of leg wraps hung up to dry.  Many of the horses had poltice on their legs, without wraps over the top. I think the wraps were probably there before, but removed several hours before the poltice was washed off.

We visited the horse that Mark and Ann had running that day.  His name is Nighttime Olympics and he is a half brother to Corny and Blue. 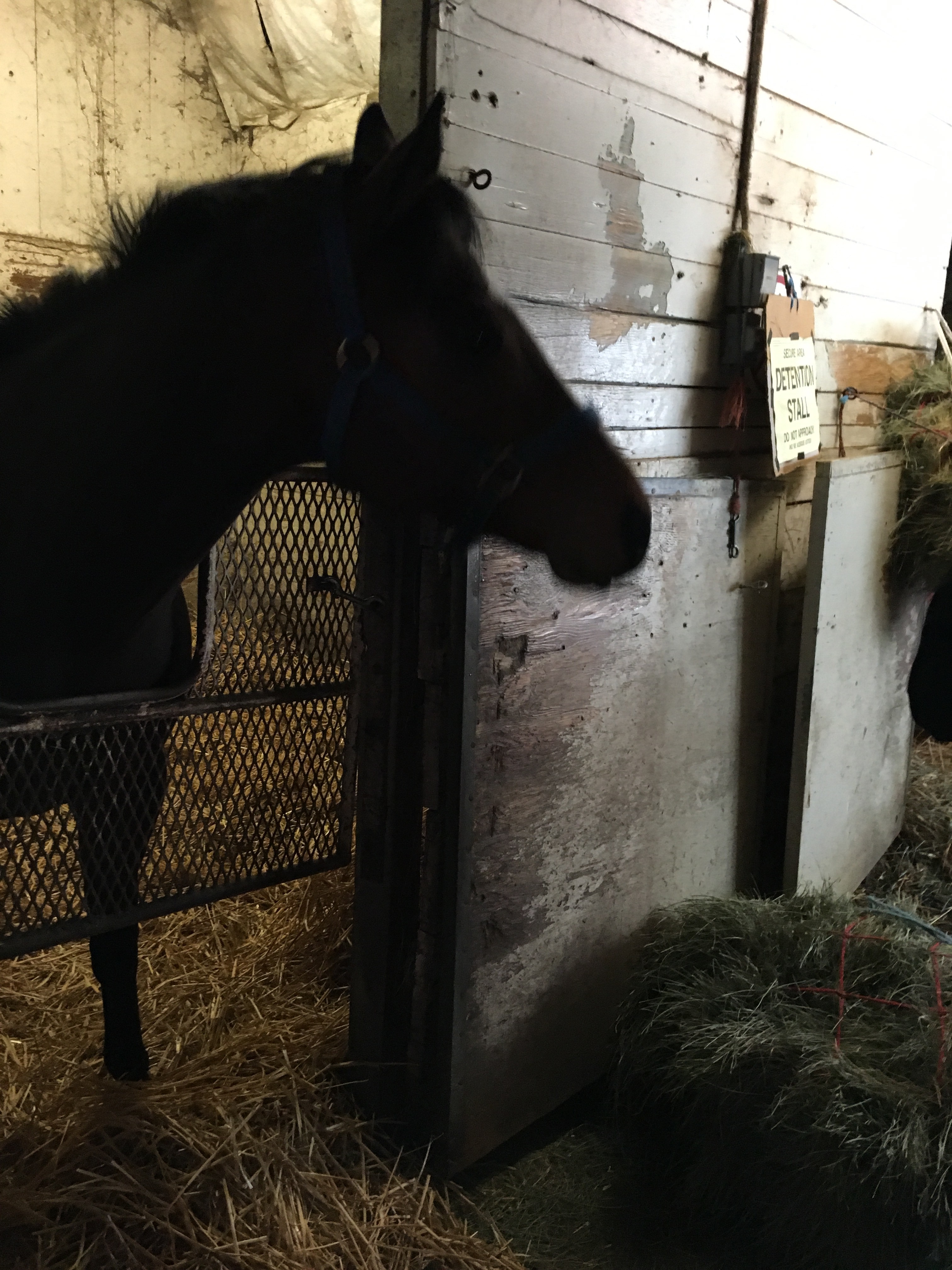 Nighttime Olympics in his stall before the race

Nighttime looks very different than his brothers.  Not only is he a different color, but he is built more like a quarter horse.  Shorter neck and legs, larger hind quarters.  He did seem to have a similar personality to his brothers, friendly and playful.
After we meet with Nighttime’s assistant trainer, we headed off to the racing office.  Mark and Ann seemed to know everybody who works at GGF!  It sure was fun getting introduced to all the trainers, owners, race secretaries, and the folks who worked upstairs in the Turf Club.

After the racing office, we made our way to the track and up to the turf club.  We passed through the rougher crowd at the bottom and went up a level to where the serious betters hung out.  They have a room with a sign over it that said “Horse Wizard.” Awesome!  I know what I want to put on my next round of business cards!

We went up still another level towards the turf club.  The cement floors and escalators gave way to carpeted staircases with brass railings.  We sat down at our table overlooking the finish line.  Joining us was Kathy and Setti, they took care of Blue and Corny at the breeding  farm during and after their racing careers.  There were a couple other owner friends of Mark and Ann in the group, as well as a trainer friend named Matthew.

Matthew was a really nice guy.  We showed each other pictures of our kids, and he was happy to answer all my questions.  And oh boy, I had lots of questions!

Some of the questions I asked him were:

Matthew and I had a nice conversation and I learned a lot from him.  There were many more questions than the ones I had listed.  Tomorrow’s post will answer many of these questions, and talk about Nighttime’s race.