Olympic Blue and Olympic Maize are the full brothers I’m hoping to take to the 2017 Thoroughbred  makeovere in Kentucky.  Their owners took me to see their half brother, Nighttime Olympics, race at Golden Gate Fields.  Yesterday’s post talked about visiting the backside stables and Turf Club.  Today, I’m going to talk about Nighttime’s race!

After our lunch in the Turf  Club , we hurried down to the track to watch the horses in Nighttime’s race get ready. 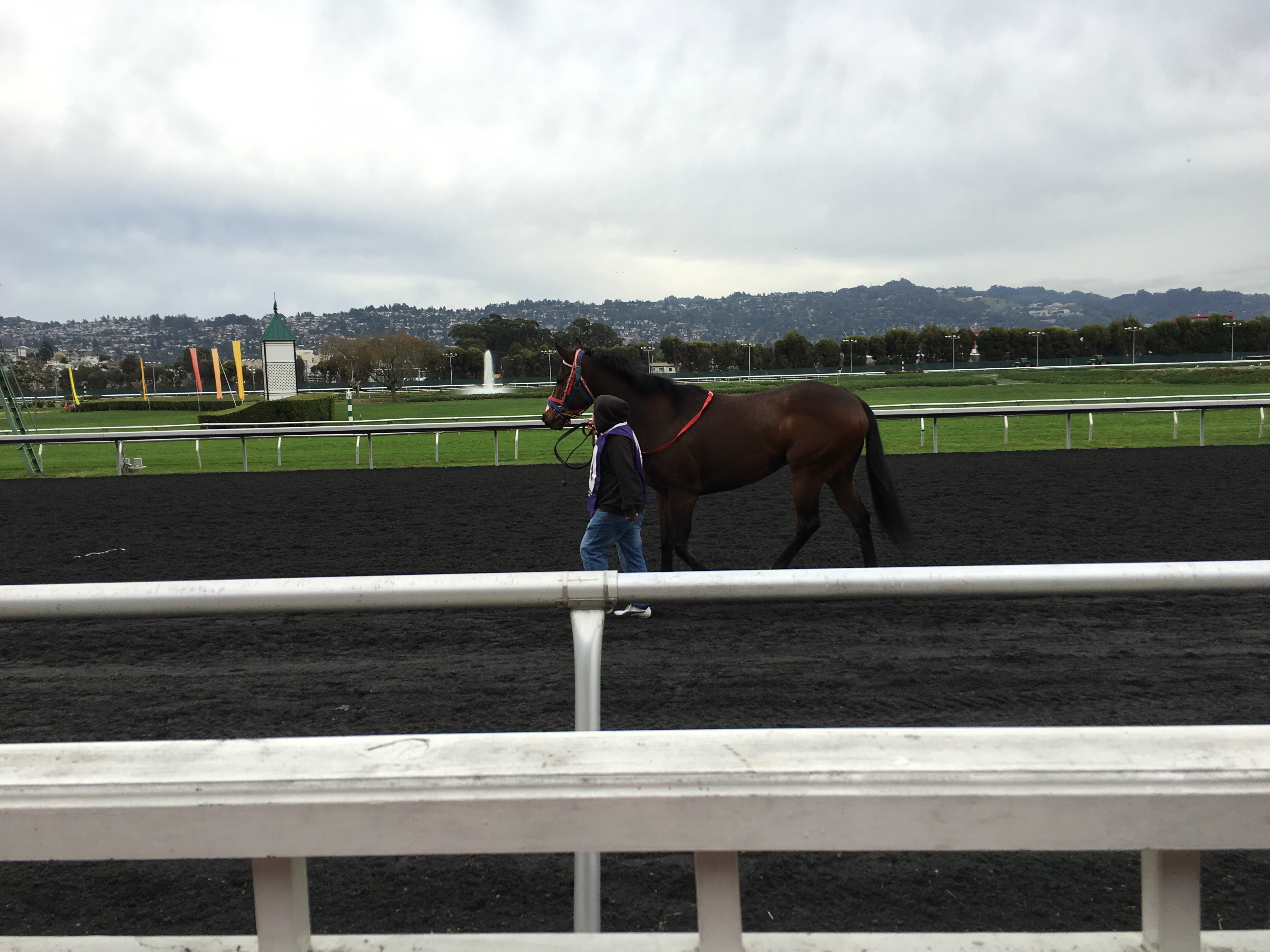 Nighttime Olympics walks to the paddock

One thing I learned from my new trainer friend, Matthew, was that race trainers are not big into changing things.  If there horse hasn’t shown a reason to need extra tendon support, he won’t wear wraps to race.  Trainers are concerned that unfamiliar wraps will throw the horse of his game.  Oh, and the wraps are not polo wraps, but vetrap. 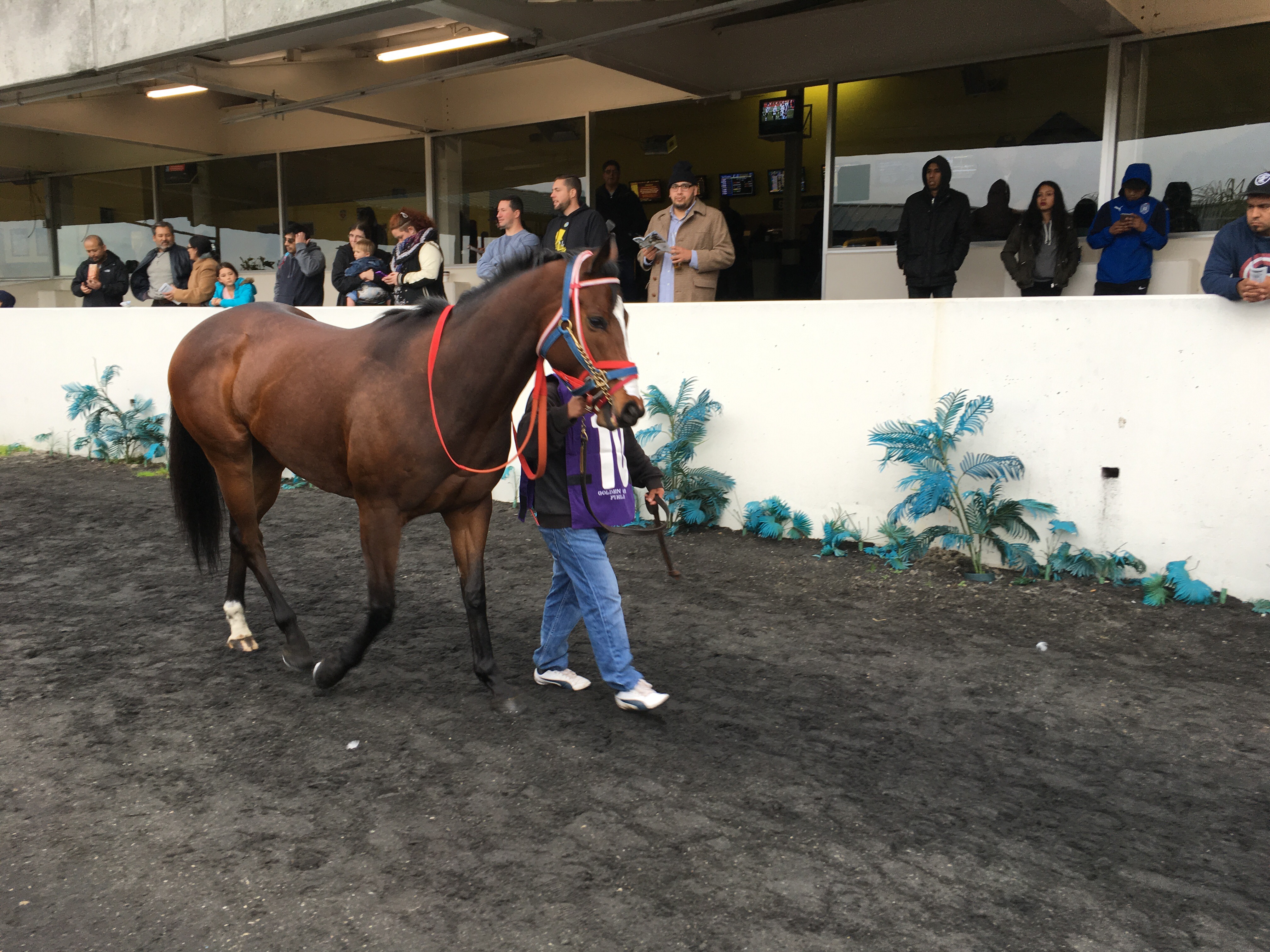 Nighttime Olympics in the Paddock

Since I was with the owners, I got to stand IN the paddock!  There was a slab of brick pavers in the center of the paddock for us to stand on.  The horses moved in a circle around us.  They were all keyed up, and some even looked legit stressed out.  One horse was sucked up and kicking at the owners as he walked by.  Others were jigging, and some were sweating and lathering up. 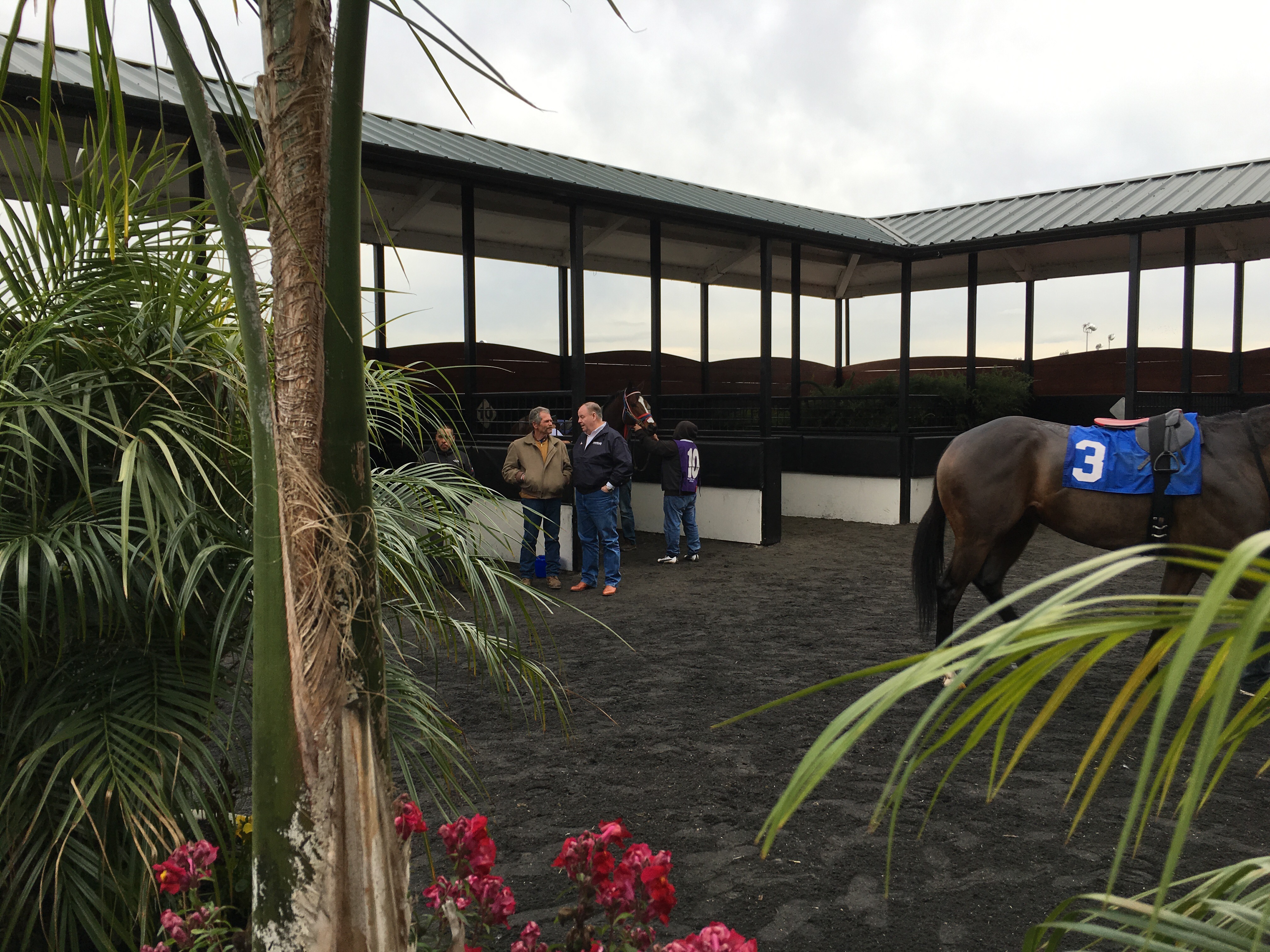 Trainers talking outside the stalls in the paddock

Some of the horses went into one of the stalls to get saddled, others never stopped walking and got saddled on the fly.

The jockeys appeared, and greeted the owners and their hangers on (me). 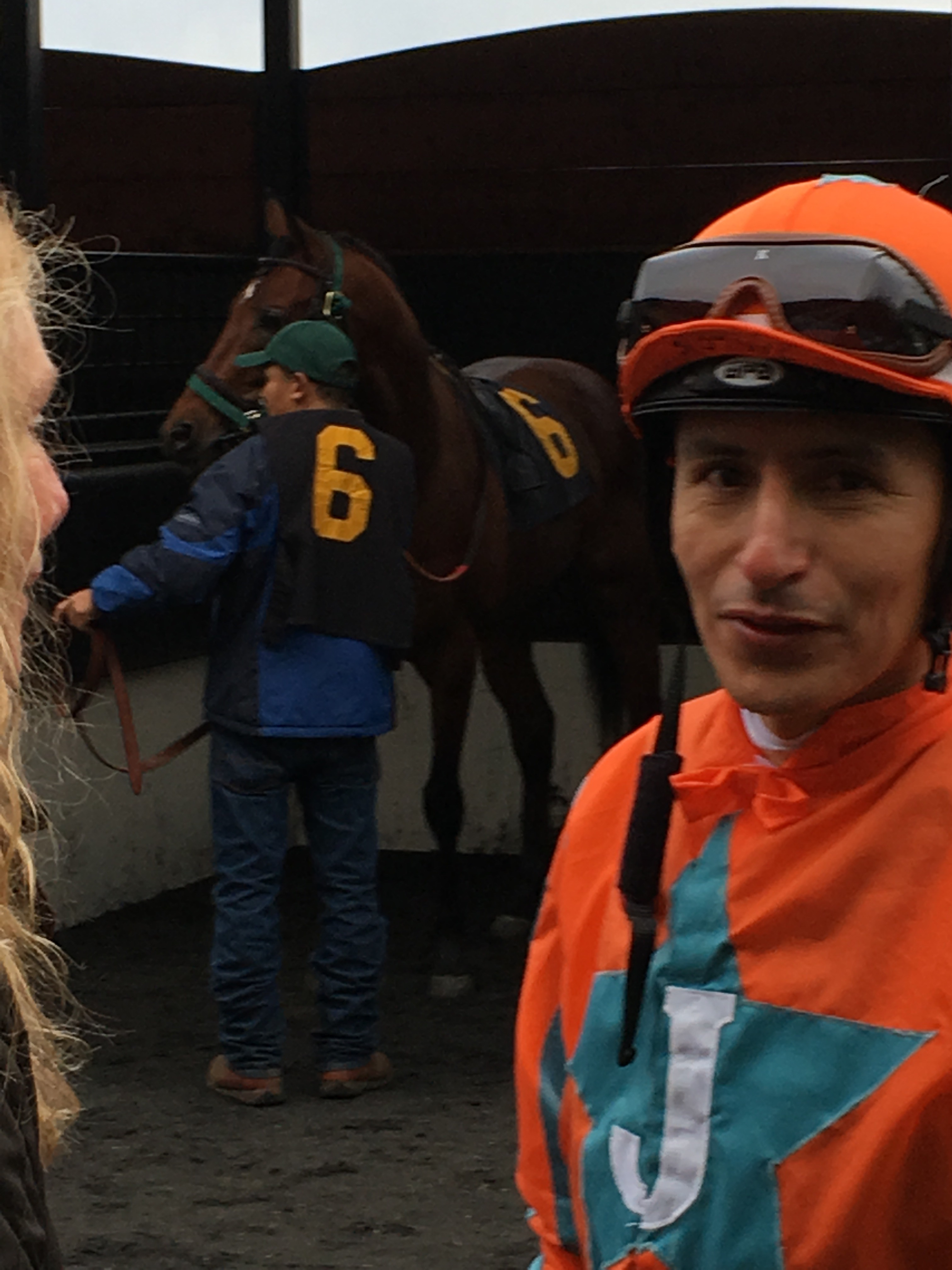 Ann and Nighttime’s jockey, Cristobal, talking before he mounted

I got a good look at Mark and Ann’s racing silks.  I think it will be fun to incorporate their colors into Blue and Corny’s show turnout.  I’m not afraid of orange. 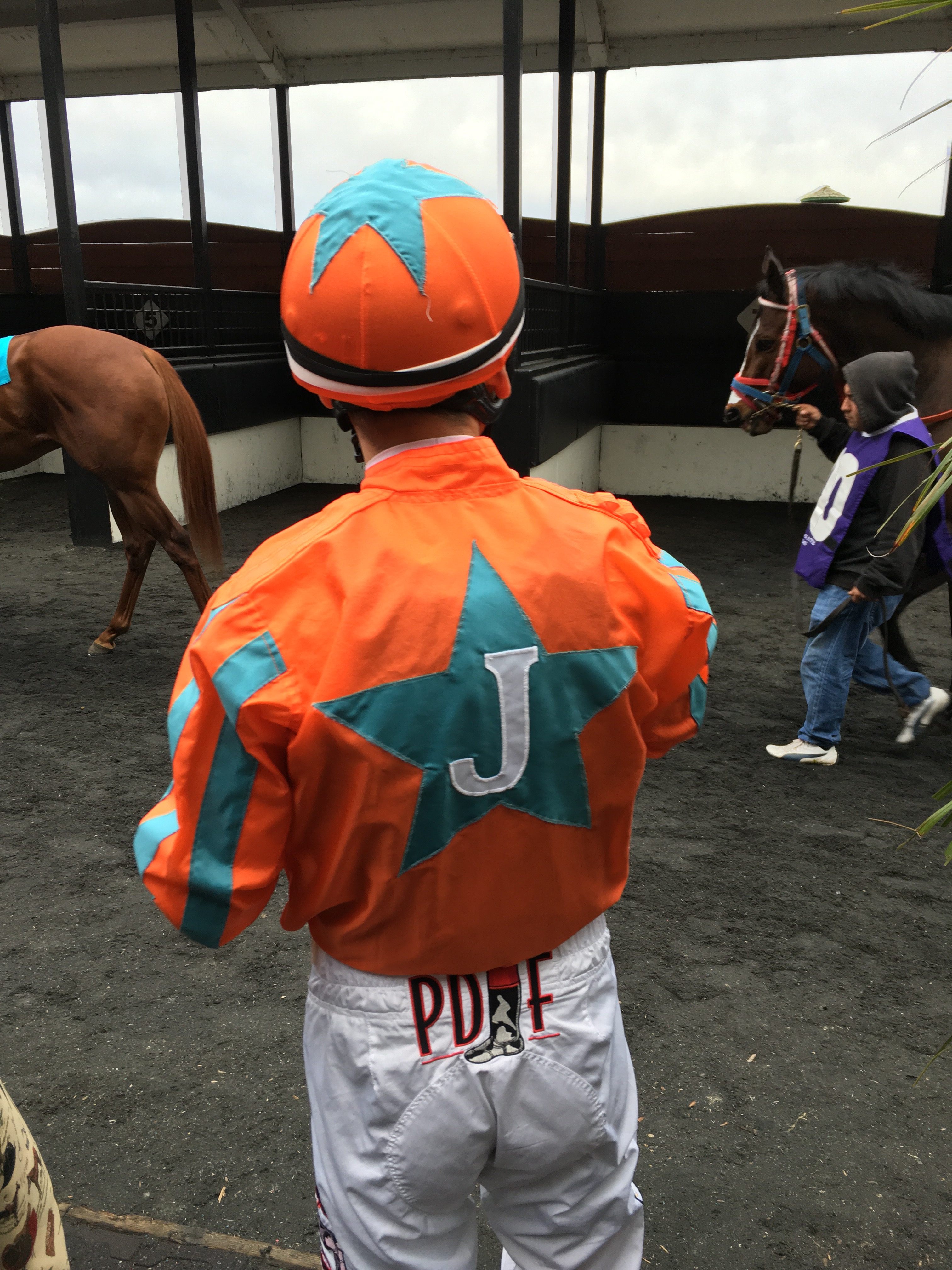 Cristobal checks out Nighttime before he mounts 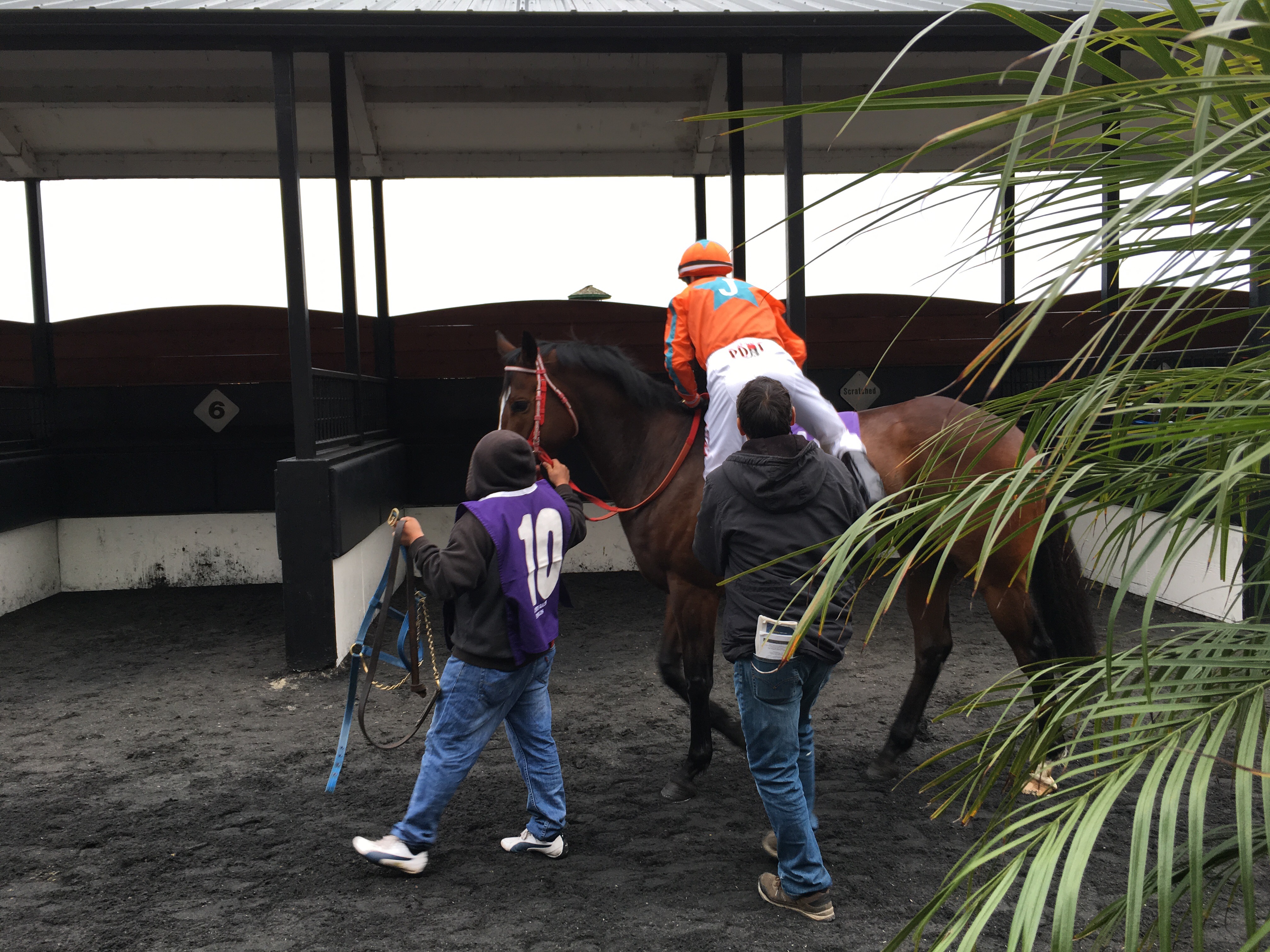 So all the horses continued walking while they were mounted.  Going forward I’m going to have to explain to Blue and Corny that it is never acceptable to walk while being mounted.

After the jockeys mounted, everyone left the paddock. The horses headed off to warm up and make their way to the starting gate.  Everybody else headed to the rail to watch.

Tomorrow I will talk about Nighttime running his race, and the conclusion of my day at the races.