Olympic Blue and Olympic Maize are the full brothers I hope to take to the Thoroughbred  Makeover.  Their owners took me to Golden Gate Fields to watch their half brother, Nighttime Olympics, race. 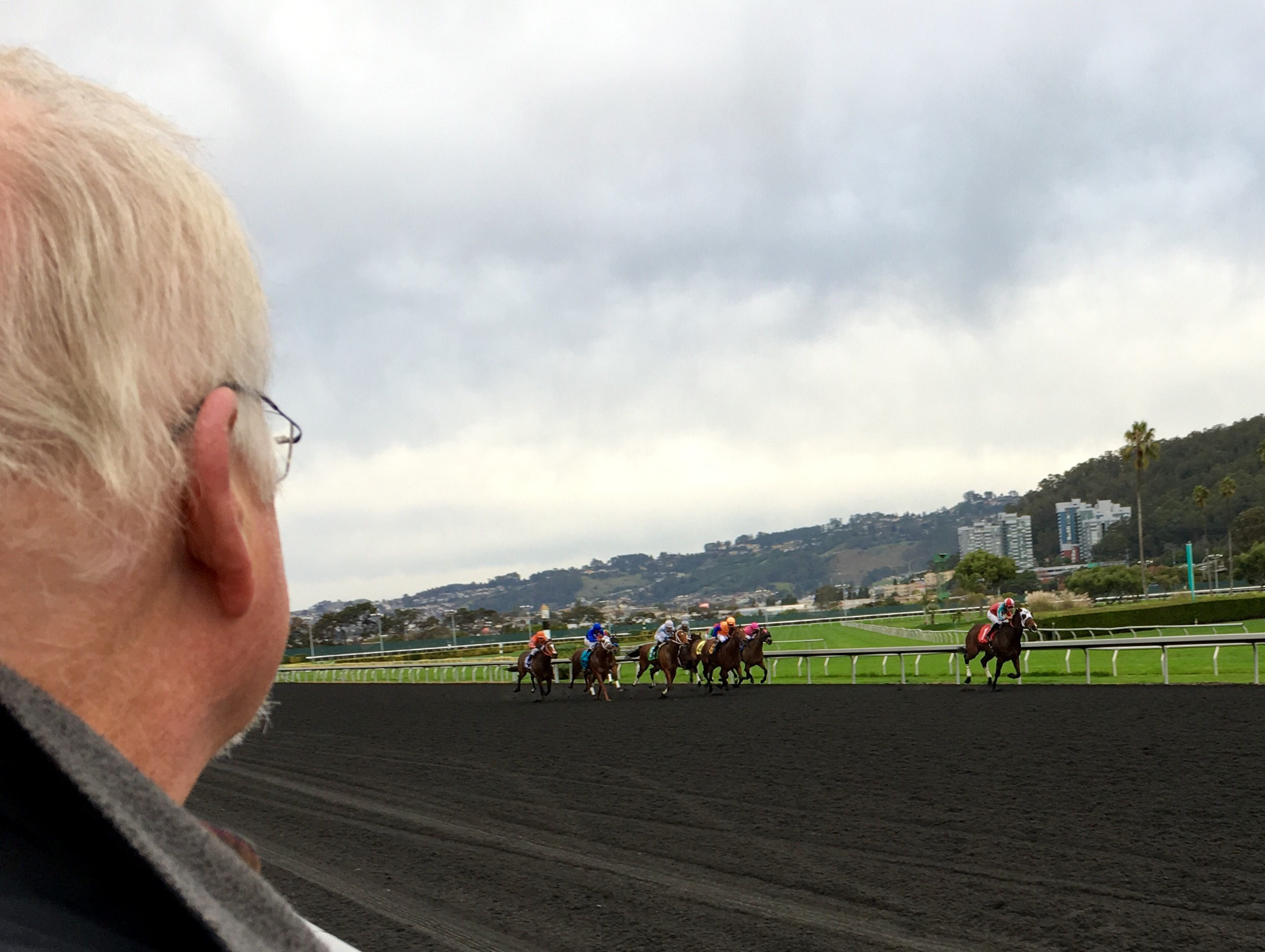 Mark looks on as Nighttime Olympics finishes his race.  That’s him on the left, closest to Mark’s chin.

Nighttime Olympics didn’t finish in the money.  He drew the 10th position and never got closer than six horse widths to the rail.  Given that a huge chunk of the race was around a curve, he ended up traveling a farther distance than the other horses.

A few hours after the race we went back to Nighttime’s stall to check on him before we left.  I was surprised to see how agitated he was after seeing how friendly and playful he was before the race.

​​Nighttime Olympics in his stall a few hours after the race

I don’t know if Nighttime was agitated from the race, bummed about losing, or stressed about his upcoming trailer ride.  In any case, he got to go home to the breeding farm after the race, as is that stable’s practice.  Seems like some rest at home will do him some good.

The other thing that surprised me about my experience at the races was the prevalence of tongue ties.  I’ve really only heard about them before when reading dressage rule books in sections about forbidden equipment.  In Nighttime’s race 9 of the 10 horses had their tongues tied down with a piece of cloth.  Happilly, Nighttime was the one that didn’t have a tongue tie. 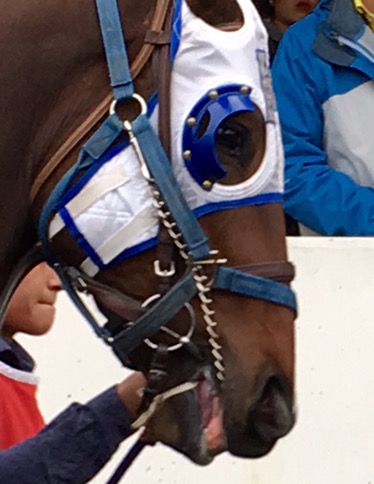 This was the horse that won this race.  I watched his tongue turn from pink to purple with each consecutive lap around the Paddock.

My new trainer friend, Matthew, said that while he personally doesn’t like to use a tongue tie, the purpose is to prevent the horse from getting his tongue over the bit.  He might have said something about it helping them breathe, though I’m not sure I heard that right since horses can’t breathe out of their mouths. Matthew said he preferred to use a figure eight noseband for a horse having trouble with his tongue.

Regarding the rest of the equipment on the horse above, most of what he’s got on is to encourage him to steer well and run in a straight line.  There are no arenas or round pens at the track.  Just the racetrack, where you have to go the same direction all the time.  It’s very different from what we see in other disciplines, but I’ve certainly seem the same sort of purple  tongue business and general discomfort at all different types of horse shows.

All in all, the folks at the track were all very nice.  There was a strong sense of community there.  Ann made a point of telling everyone we met about the Thoroughbred Makeover we are hoping to do, and everyone was excited about that.  There was a palpable love for the horses, but it had a different flavor than the type of love you see at horse shows.  It was less cuddly due to a prevalence of men working with the horses instead of women and girls.  Instead of being a partner or pet like their show horse counterparts, these racehorses seemed to be the way for a lot of people to earn a living doing something they have a passion about.  You can’t fault that, everyone should be so lucky as to work in their passion.