Olympic Blue is one of the thoroughbreds I intend to take to the Thoroughbred Makeover in Kentucky.  He’s now been in part training with me for two and a half months, this is an update on his progress.

The format of the Thoroughbred  Makeover  competition is to take a racehorse and transform it into another kind of horse (trail horse, polo pony, hunter, etc) in less than a year.  This strict timeline encourages training short cuts just like futurities tend to do.  However, I’m more concerned with Blue’s long term training than I am about going to Kentucky, so I’m going slow and trying not to leave any holes in his basics.

Blue’s groundwork has improved, he can now easily yield his hindquarters, shoulders, and barrel in the walk.  He can do most of these yields on the line in the trot too.  This work is lightening him in my hand, as he habitually keeps a strong and steady pressure on the line.  The canter is still more problematic, and while he can canter a circle on the line now, he can’t hold a lead yet. 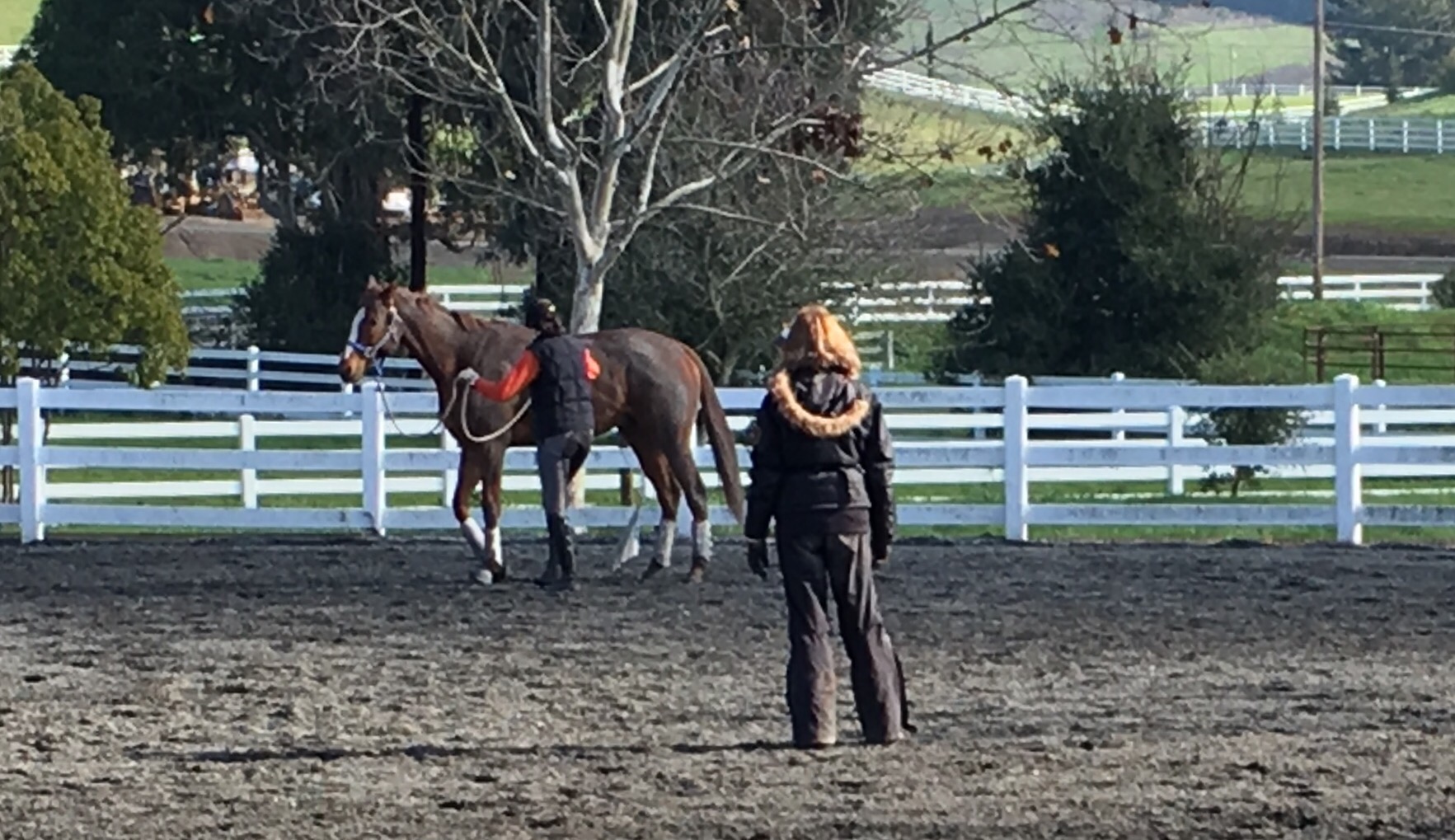 Yielding his barrel while Terry Church looks on 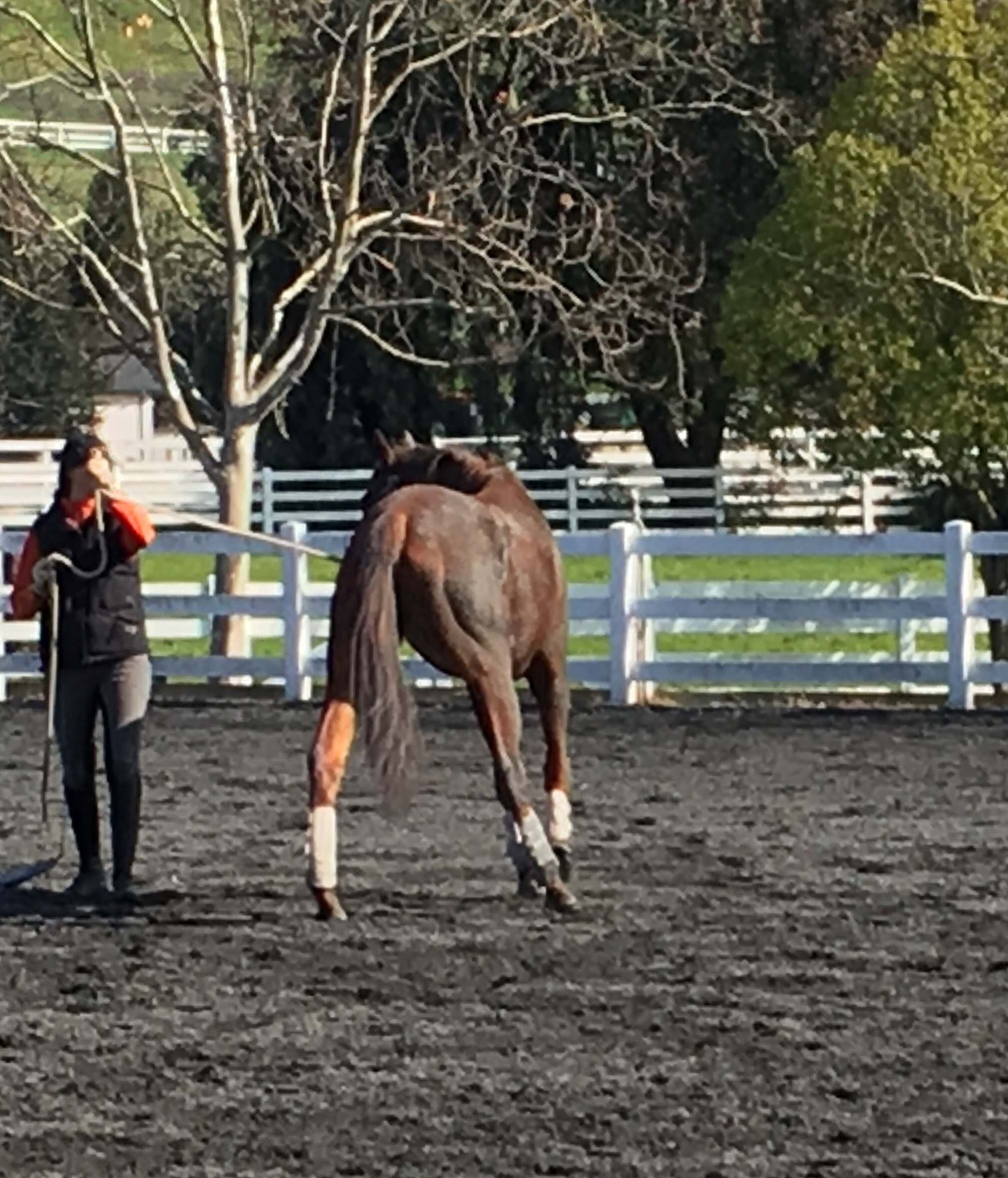 Nice abduction of the outside hind!  Blue is softly executing a walking rein yield/haunch yield.

We found a bit that Blue likes better than the simple dee ring snaffle I had on him .  He’s now going in a 3 piece loose ring snaffle (French link with bean).   I took the opportunity to switch bridles at this point so he could have a black one to match his saddle, instead of a brown one. I stole his bridle from my pony (My Poni) since he has a dainty head.  I’m leaving the noseband on, but keeping it super loose.

Under saddle Blue has found an even walk tempo with consistent stretch and energy.  We can do this walk in the arena and around the ranch.  He can execute a rein yield and a leg yield in the walk without resistance. 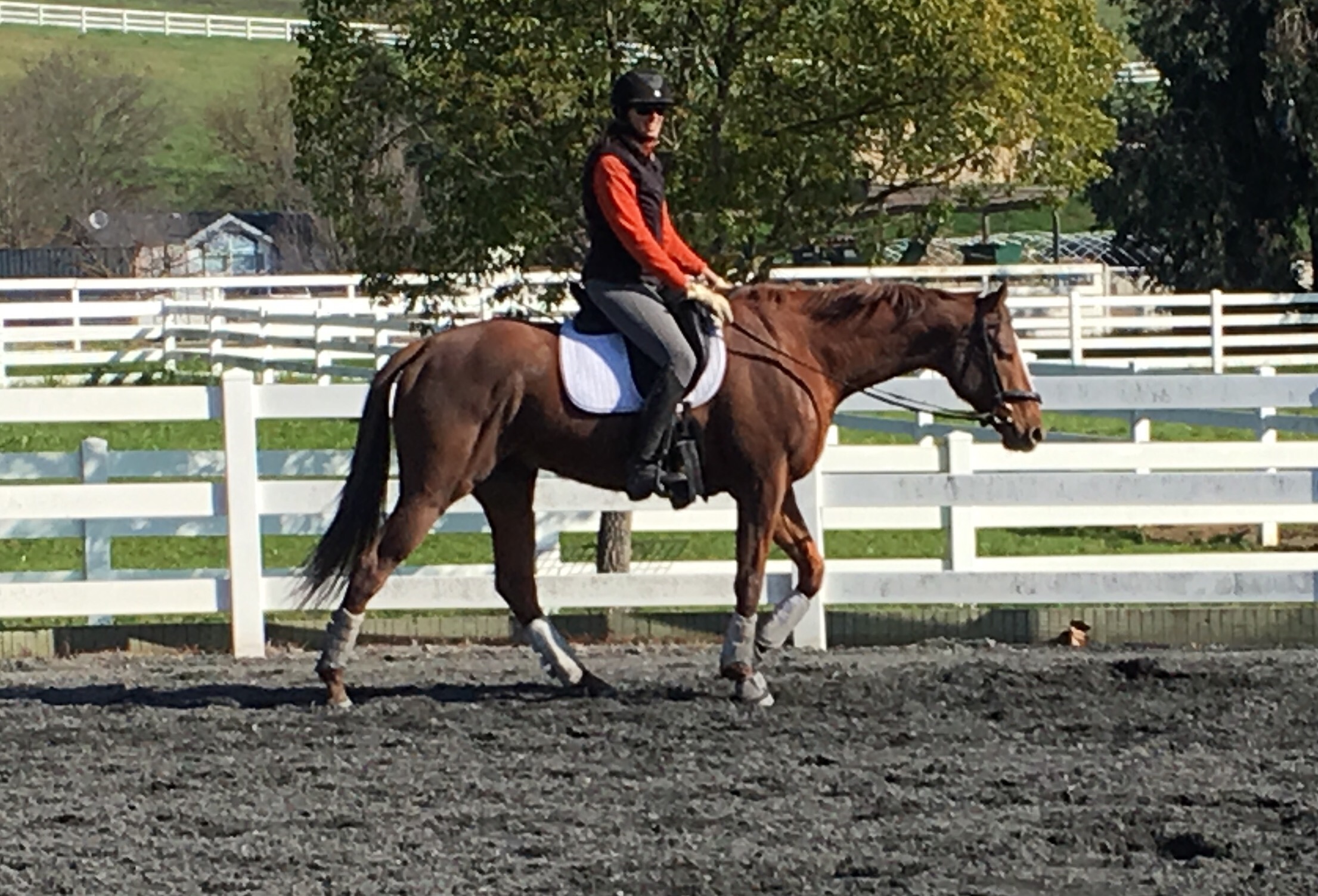 This is about as high as Blue’s neck gets in the walk right now.  He’s got a pure rhythm with good energy and reach.

Blue is working on these same elements in the trot.  He’s making good progress towards an even tempo, an even stretch over his top line, and yielding from the rein and the leg in the trot.  When he is more consistent in these departments, we will begin cantering under saddle. 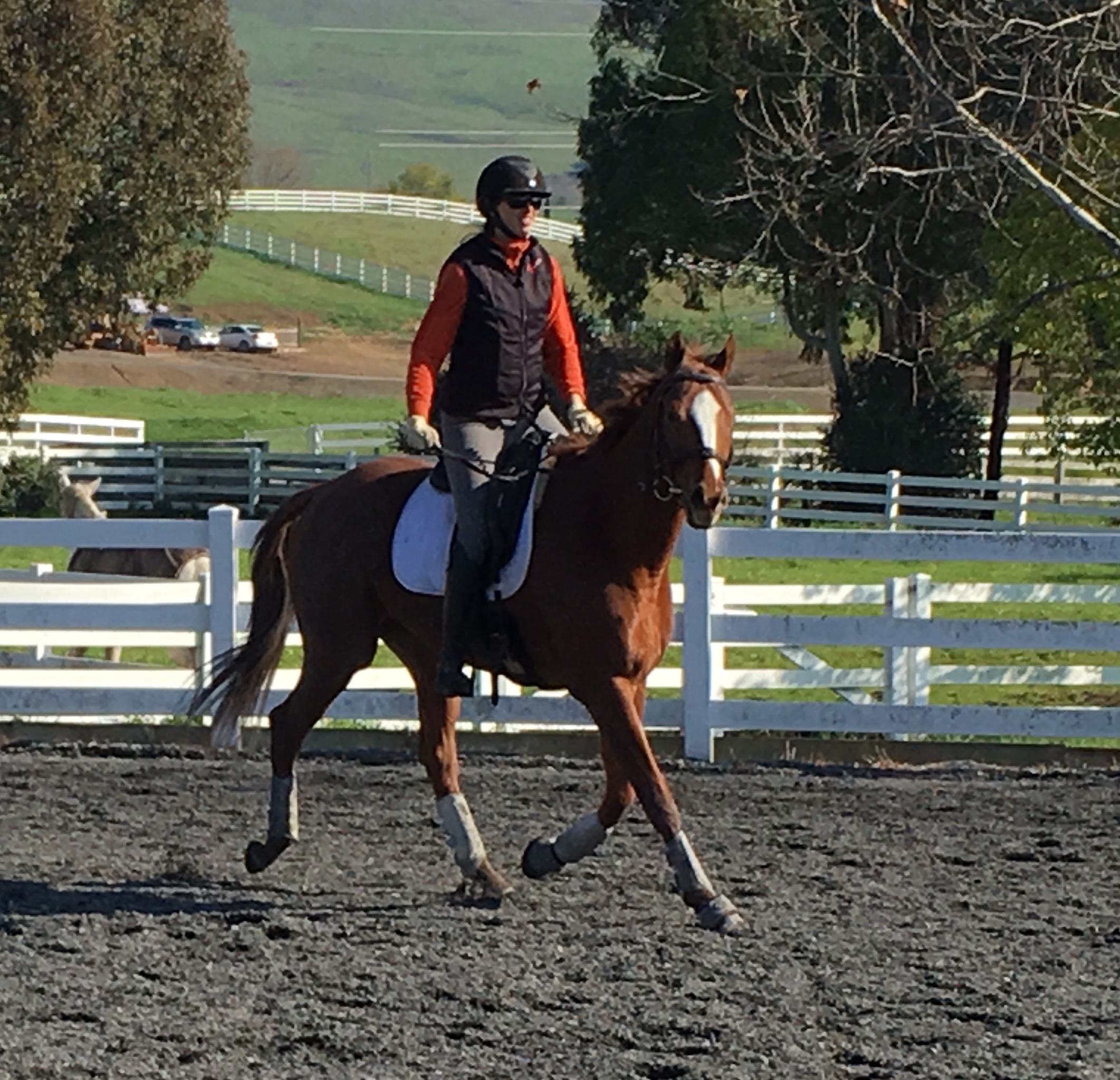 This is the worst we do in the trot right now.  Even so, it’s not horrible.  While his neck is up and his back is down, he is not bracing against my lateral aids.  This arena is on a bit of a slope and we had some trouble turning and balancing while going down hill. 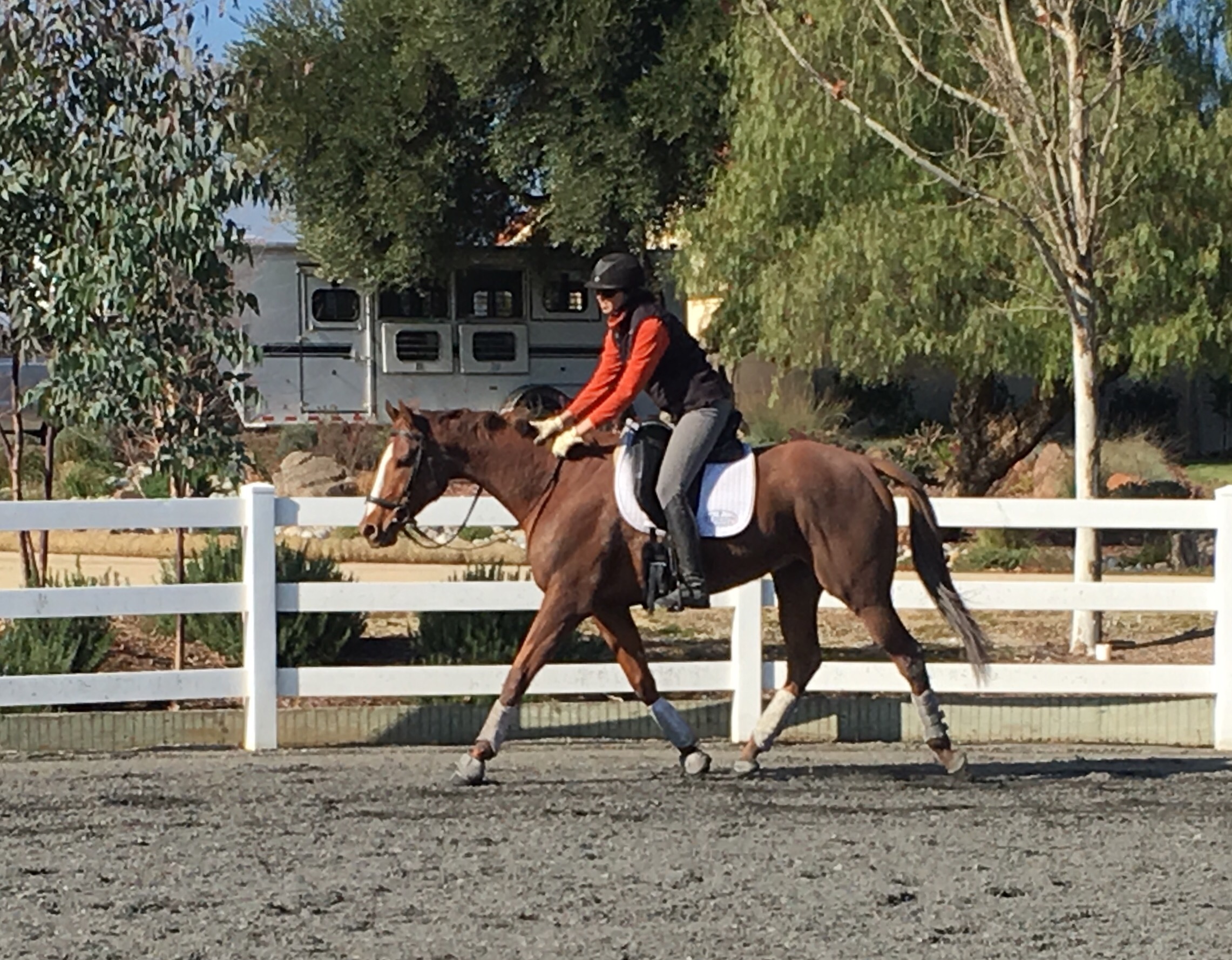 I’m certainly not winning any equitation contests here, but I am encouraging Blue to lower his neck via direct pressure.  Moving around in the tack is also useful to teach Blue  how to balance with a rider on top of him who is not going to hold him up. 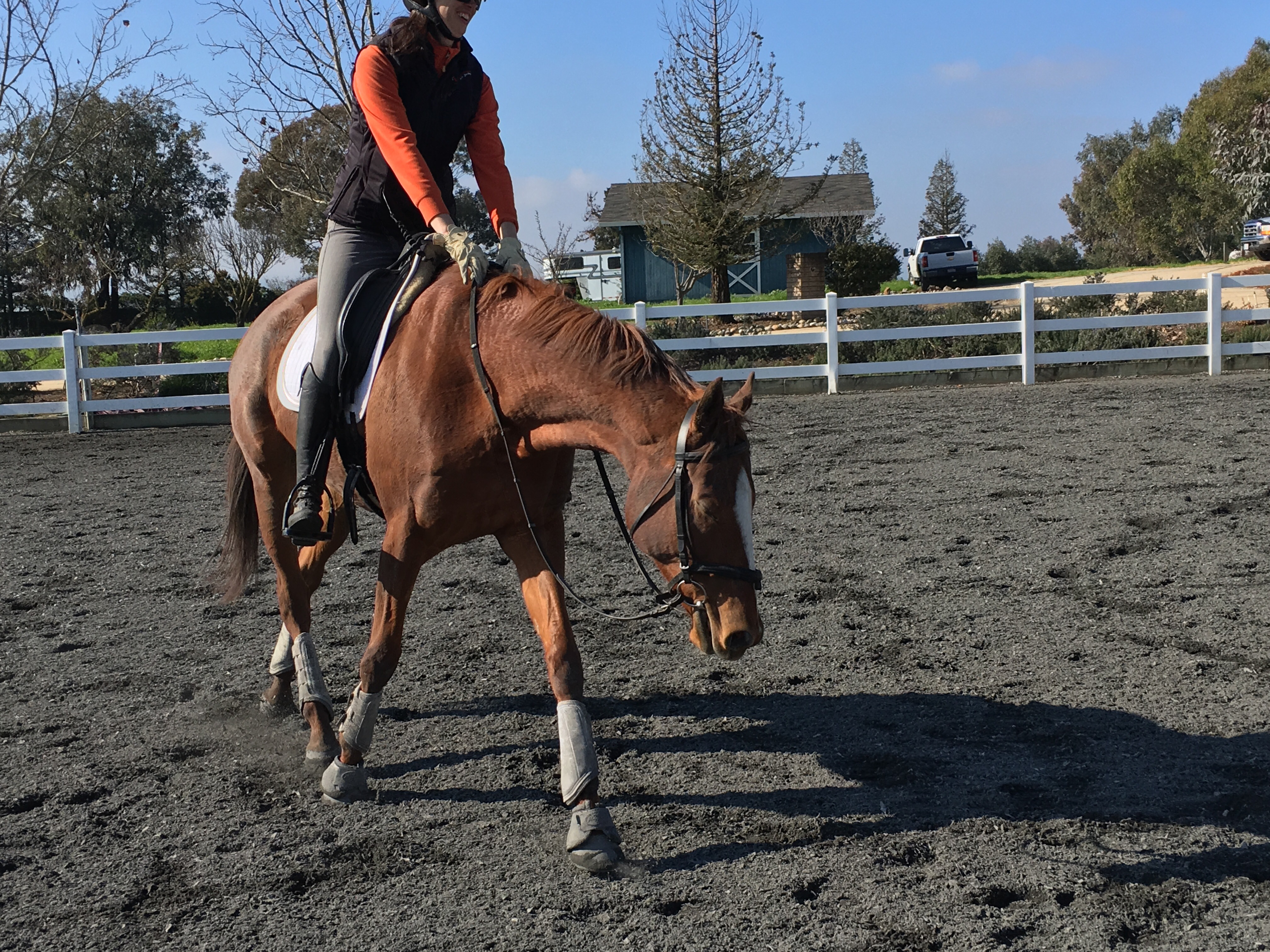 Ah ha! This is what I’m going for!  Blue is stretching his neck down and lifting his back up.  He’s got an energetic trot that isn’t running.  He’s softly following my left rein’s request for turning and bending without leaning in.  If I’m being hyper critical I would like to see his mouth more relaxed.

That last picture looks like an example of a good stretchy circle as is required in training and first level dressage tests.  In competitive dressage, my reins would have less slack in them, but Blue’s outline would be the same.  The stretchy trot is worth double points because it is demonstrative of having correct basics, just like the ones I’m trying to teach to Blue.

Picture credits to Elise Lalor, who took photos of my ground work lesson with Terry Church, and riding after the lesson at Zorado Fields.