My last post updated Blue’s progress towards the Thoroughbred Makeover.  This post will update you on his brother Corny’s progress.

Corny has been steadily improving under saddle.  Occasionally he pushes back when he feels the rider’s leg.  Kate has been doing a great job with teaching him that the rider’s legs mean go forward.  He’s given us some sass along the way, but ultimately is heading on a steady trajectory of improvement.

That is, until last weekend.

I recently posted that it is very difficult to hurt a horse while cleaning his feet, stating that the only time I did so was when I accidentally discovered, and popped, an abscess in a horse’s sole.  Well now I’ve hurt a horse by picking his feet twice.

I took Corny to a clinic with Terry Church last weekend.  On the second day he jumped and pulled back when I was cleaning his hoof. When I picked up his hoof after this incident, this is what I saw. 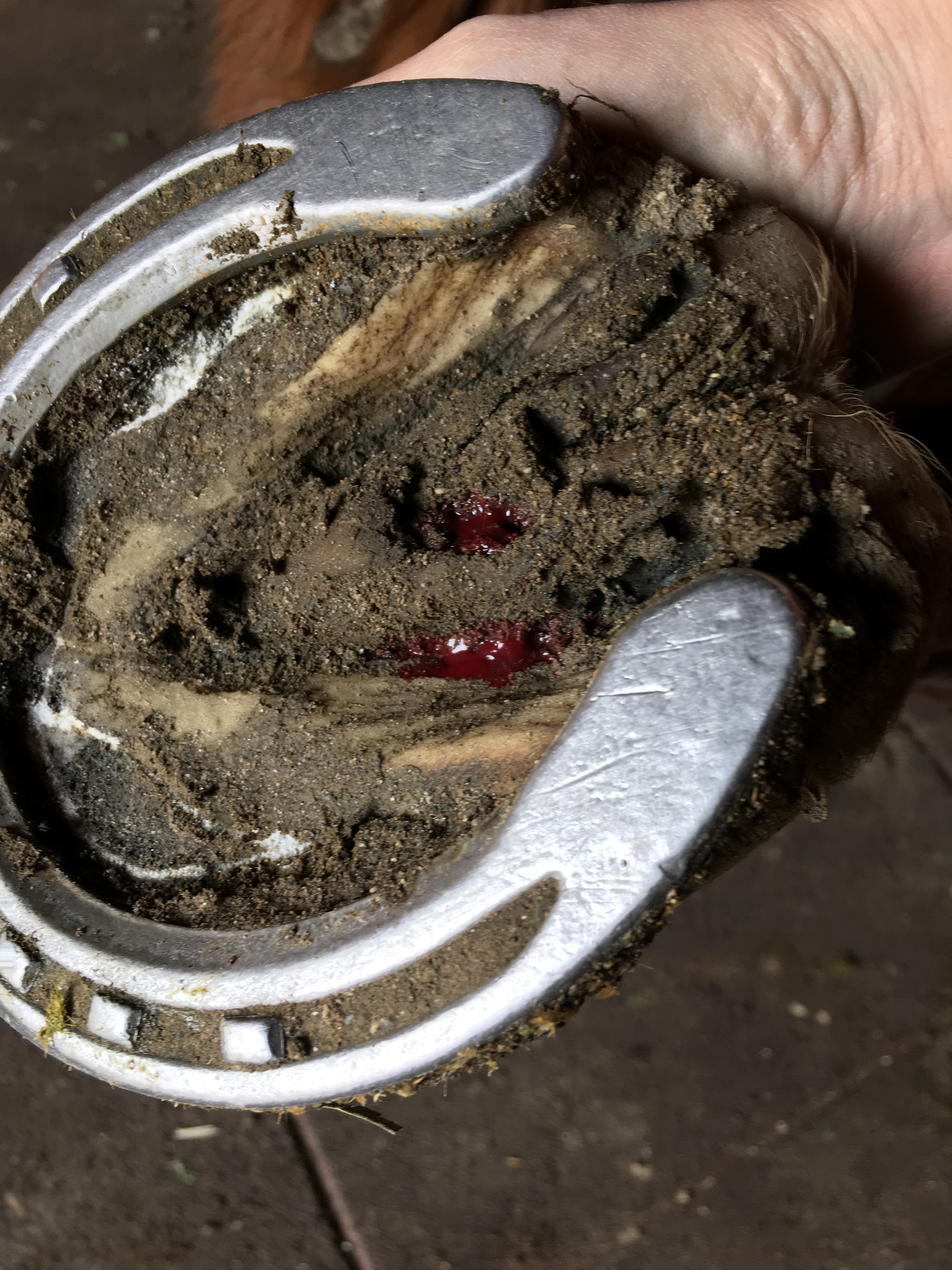 Yup, Corny is bleeding from his foot.

I knew this was likely deep thrush, but I freaked out anyway.  Thrush is a fungal infection that is very common in its mild form.  This is a severe form.  I knew a farrier friend of mine was on his way to the clinic as well, so I frantically texted him and he talked me down a bit.  He thought I could probably still use Corny in the clinic, but unfortunately Corny was significantly favoring the foot.

I brought Corny home and tried treating him as my farrier friend suggested.  Cleaning up his hoof the best I could, and applying a Betadine mixture to it. The problem was that Corny is so tender on that foot that he wouldn’t let me touch his frog, even with my finger.  Normally good natured Corny was simultaneously yanking his front foot away from me and trying to kick me with a hind foot.  He was unsuccessful because he isn’t quite athletic enough to pull that off, but I wasn’t getting anywhere in treating  his thrush.

I had the vet take a look because she had drugs if Corny decided not to participate in his treatment.  Corny behaved nicely for the vet who was able to clean up his foot, pack with iodine, epsom salts and gauze, and wrap it.  Corny has to wear the wrap for a week, then he gets shoes with a hard pad.  Hopefully he won’t be painful by then and he can resume training.

Unfortunately this is not the same sunny update as we got with Blue.  Hopefully Corny will be back on track in a couple weeks.