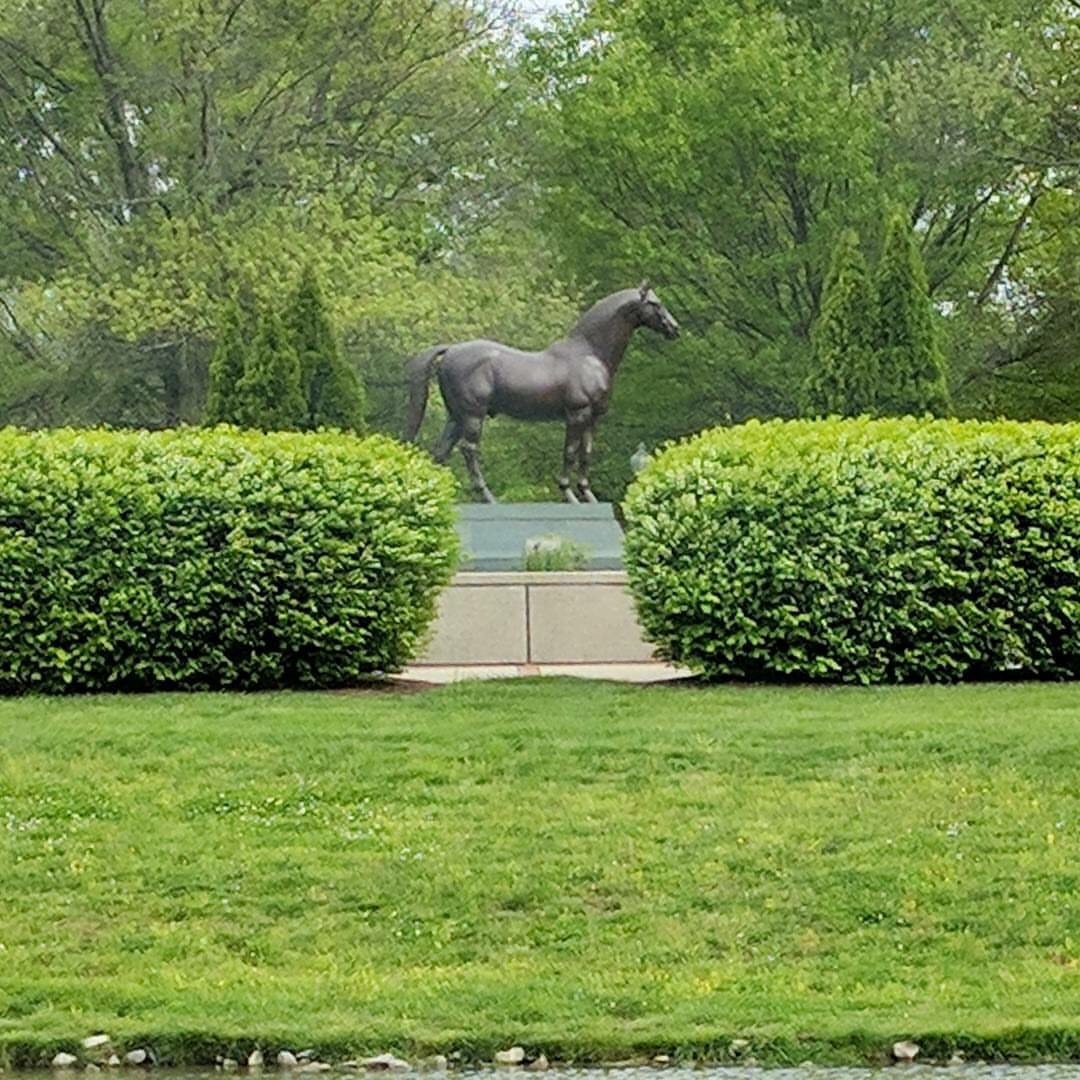 Late in 2016, I took on a couple ex-racehorses in my program for Janlois Racing.  Full brothers Olympic Blue and Olympic Maize are eligible for the Thoroughbred  Makeover competition to be held at the Kentucky Horse Park in October of 2017.  I signed up for the competition and we began to prepare the horses.  Their owner, Ann Janlois, was particularly excited for the makeover and said the makeover would be her Kentucky Derby.

Upon entering my program both horses were quite stiff and body sore.  After some of their basic training, I began to work on loosening them up and teaching them to relax in their work.  We made good progress for quite some time. 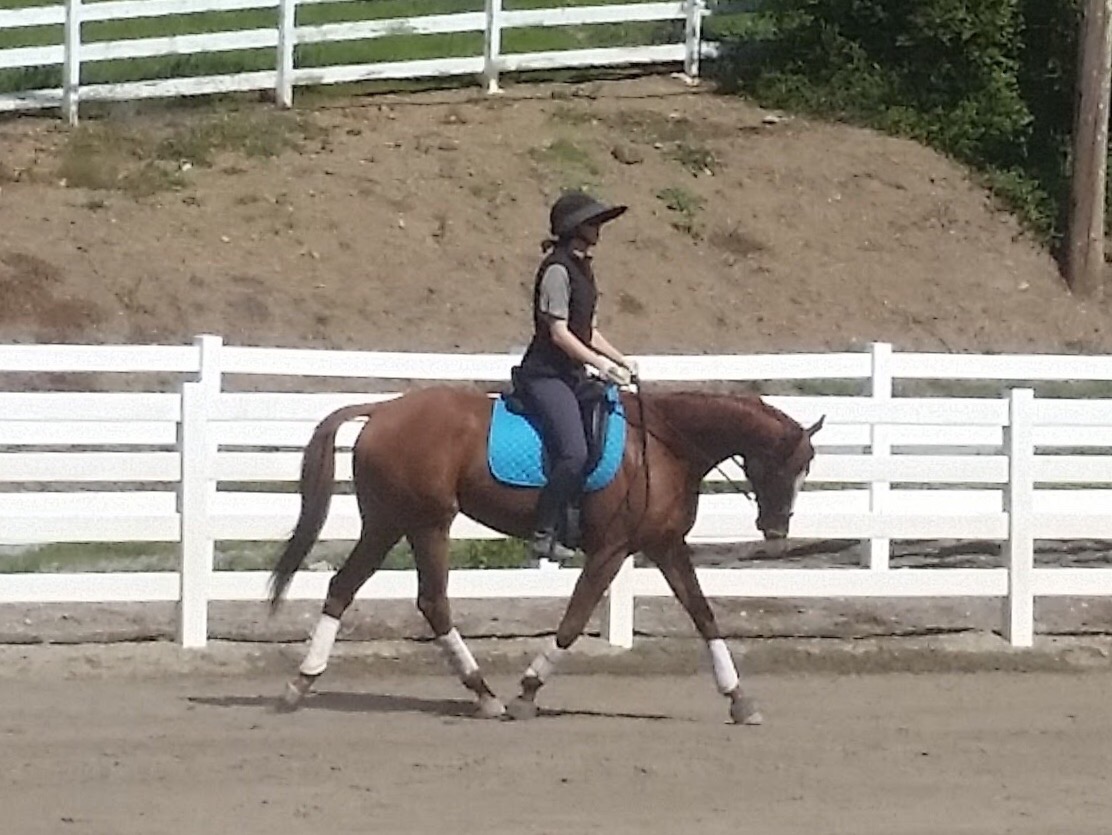 Olympic Blue
Then Corny had his struggle with thrush, and keeping shoes on.  He also had a hard time going forward when he was going to the right.  At his next appointment with our wonderful chiropractor, Wally Palmer, he thought some of his thrush issues and way of going could be indicative of a bigger problem. 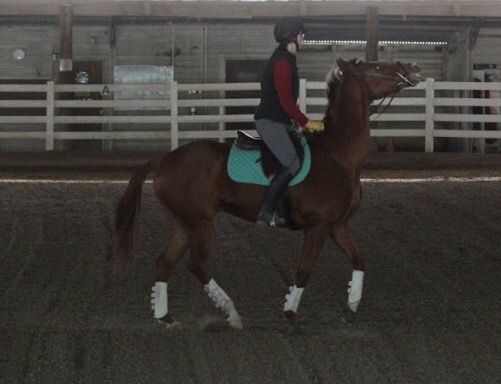 Olympic Llama (Corny) would sometimes do this when asked to go forward to the right.
Blue hadn’t been doing that well either.  He had been on an up swing for quite some time, but then began to struggle, losing his hind end, and stumbling.  After a couple weeks of that, Blue saw the Chiropracter, who advised that it was time to work up his lameness.

I’m blessed to have a good team to keep my horses going and happy.  Dr Palmer, the chiropractor, and Dr Kielty, the vet, work very well together.  Over the next several weeks we did countless blocks, and examinations.

Blue proved to be a very complicated case, never blocking all the way to any specific location, but several blocks changed his way of going.  Our interpretation is that Blue has multiple areas of discomfort and he wasn’t telling what hurt him most!  We decided to inject his hocks and stifles, thinking that might help calm some of his issues down.  Unfortunately he showed negligible improvement and we decided to give him another year off to recuperate from the stresses of his glorious racing career. 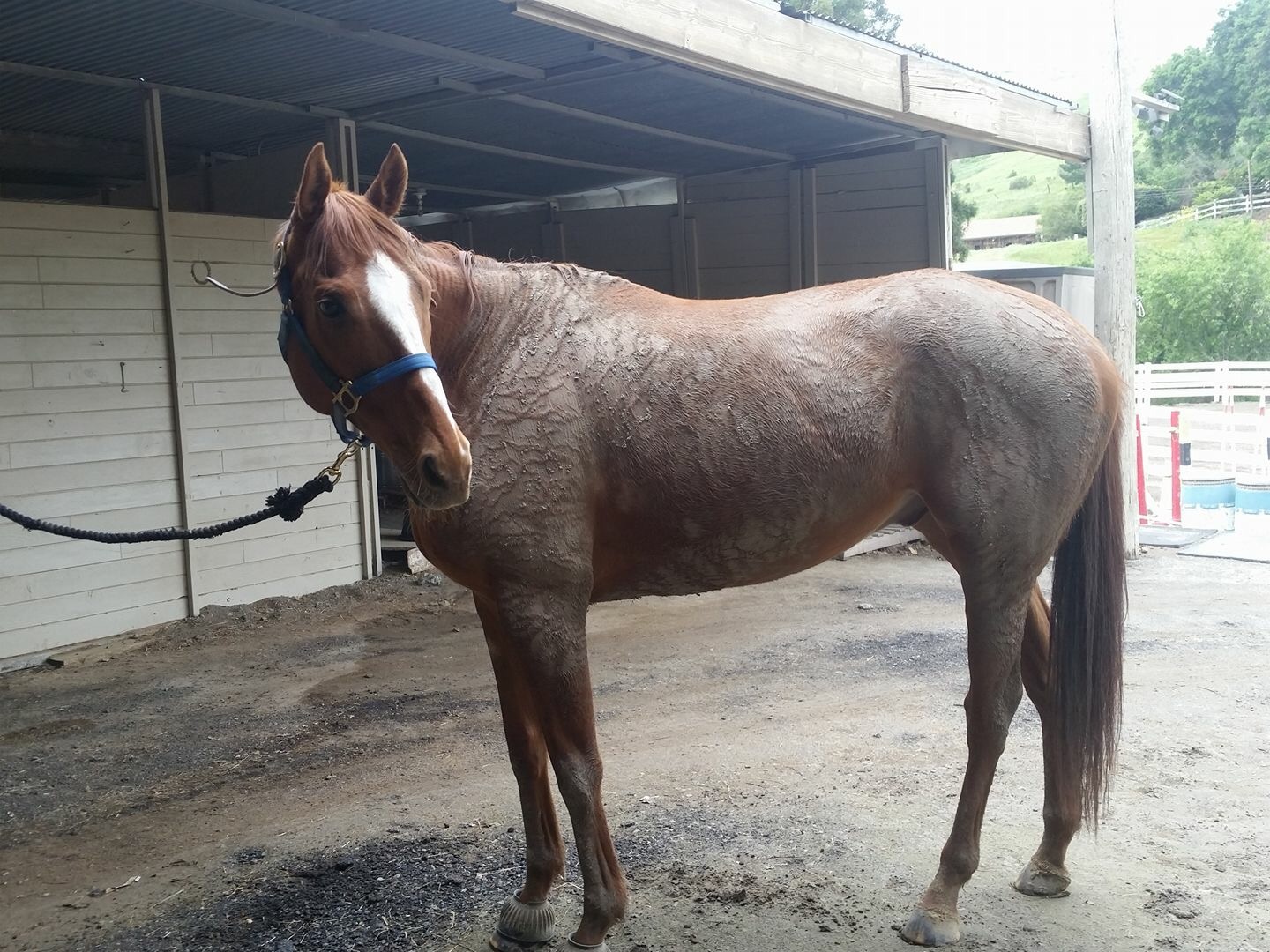 Blue enjoys his turnout time and exfoliating mud baths
Corny blocked to his knee, which we injected yesterday.  We can also make some improvements to his shoeing after his radiographs which should hopefully make him more comfortable.  Fingers crossed and we will see how he is in a couple weeks. 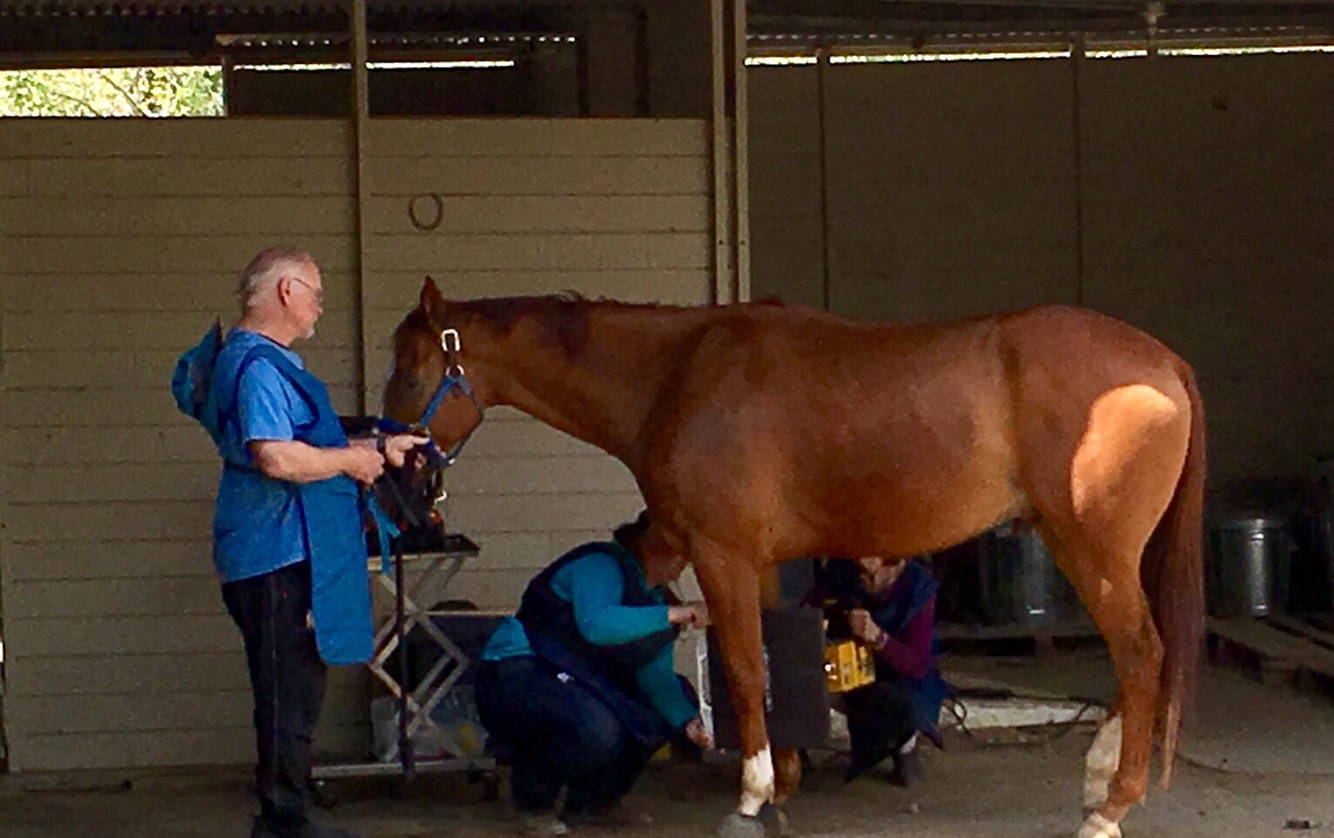 Mark Janlois has become a very hands on owner, here he holds Corny for his radiographs
In all honesty, Blue was our prime hope for being competitive at the Thoroughbred Makeover.  Now that he is sidelined, it’s unlikely that Corny will develop a strong aptitude and sufficient training for any of the 10 makeover disciplines in time for the competition.

So we aren’t going.  The universe seems to be driving this fact home.  I obsessively watch one sporting event every year.  The Rolex Kentucky Three Day Event!  I get a lot out of watching the high quality of riding at Rolex, you should watch too.  It’s this weekend!  And it’s also held at the same venue as the Thoroughbred Makeover, the Kentucky Horse Park.  I spent the first part of this year dreaming of riding in the same hallowed ground as the riders I am wistfully watching in the competition. 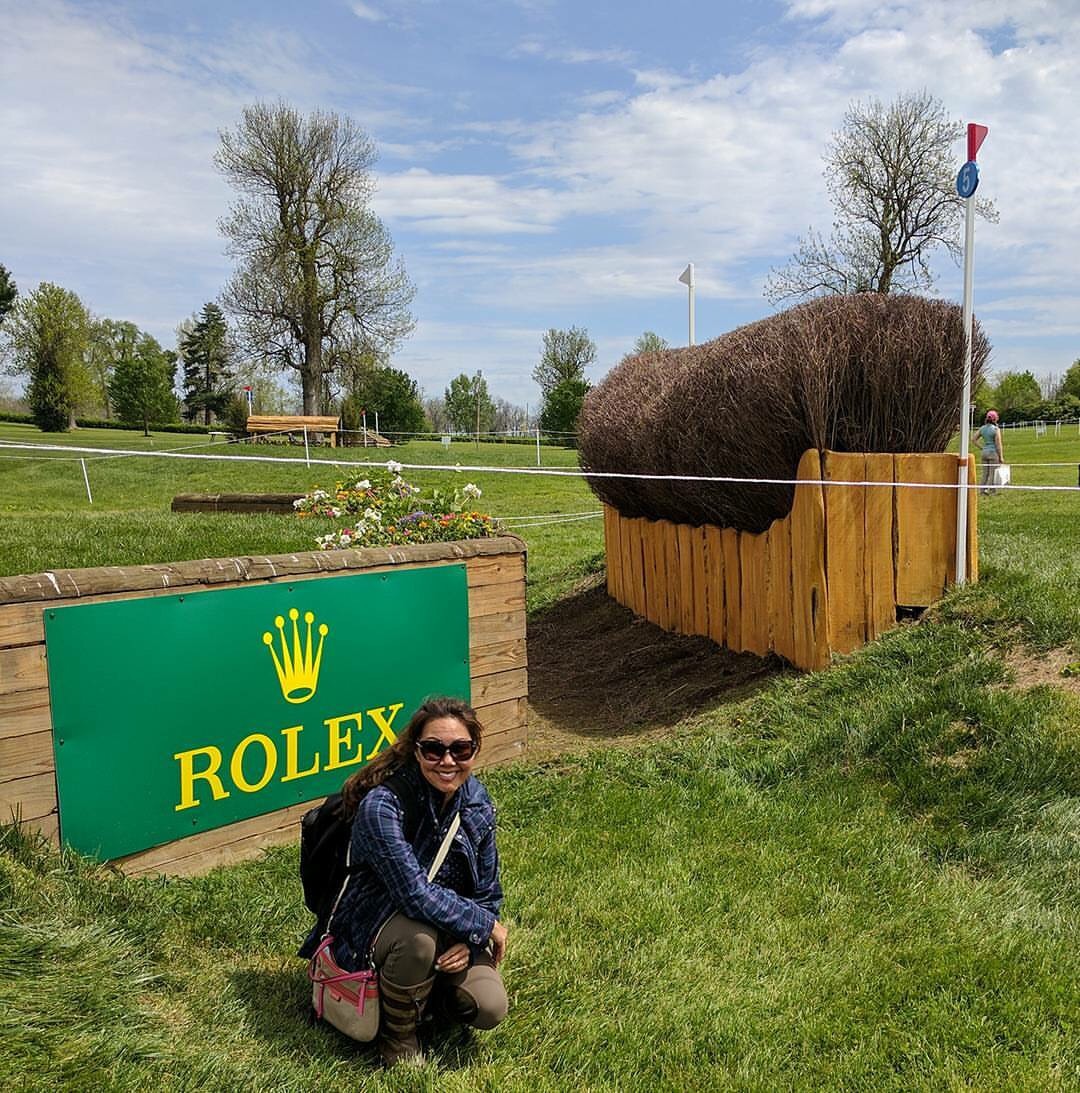 That’s not me, that’s my friend Elaine at the Kentucky Horse Park
The universe is also telling me it’s not meant to be by removing traces of the makeover from my life.  I had Retired Racehorse Project stickers on my car and truck.  Well, I traded in my truck last weekend, and my car is for sale, so soon I won’t have any stickers. (Anyone want to buy a 2008 Nissan Rogue?)

I’m sad to be missing out on the thoroughbred makeover competition. It was a fun journey, and I was looking forward to a heck of an adventure!  I’m very happy that Blue and Corny are staying in my program. They are so lucky to have owners that put their well being first.  And as for their trainer? I’m on the lookout for a new adventure!

The grave of legendary thoroughbred Man o War, located at the Kentucky Horse Park.  PC Elaine Hanscom
About the author: Ali Kermeen loves all kinds of horses and doing all sorts of things with them.  She’s currently looking for a new adventure, will it be working equitation?  Driving?  Cow work? Keep reading the Happy Canterer blog to find out what’s next for Ali.